No web site about chicken keeping would be complete without some words on foxes, because, whether you love them or hate them, Monsieur Renard will always be a close neighbour. Red foxes (Vulpes vulpes) are highly successful members of the dog family and 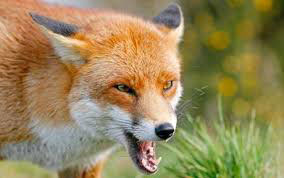 are known as Canids. Other members of the same family are, wolves,coyotes, and arctic foxes. Due to its adaptability and ability to eat whatever foods are locally available, it has colonised a wide variety of habitats including urban areas, and is distributed across the world.
Like most carnivors, the habits of the fox are often in conflict with people, but for many small poultry keepers, the fox’s visit has meant disaster for their much loved hens.

A sobering fact for chicken keepers – a recent survey confirmed that commercial free-range egg producers could lose up to 1000 birds to foxes in a laying cycle, that is – birds between 16 and 72 weeks of age. The average loss of hens across the UK is about 2%, but as most garden chicken keepers will tell you, there are numerous occasions when a fox will either take an entire flock of back yard hens, or pick out the very best birds of the flock in what looks like a blood-thirsty orgy of killing.
In reality, this is not the case because, despite the popular misconception that foxes kill for pleasure, they often have difficulty in finding enough food and if the opportunity arises they will take additional food to store. Spare hens will be buried in the same way that a dog buries a bone, and don’t be surprised when your neighbour with the well tilled garden, comes across a carefully buried hen in amongst the potatoes!

Some people are lucky, and go for several years without a fox attack, whereas others may lose a new flock within weeks of arrival. He will not only watch the hens, but he will have you in his sight too, and will soon get to know your routine, when the car leaves, how long the dog is out for, and so on. He is a great opportunist, and very patient too. He may watch you shutting the hens up at night, for months on end, before the evening when you are delayed for half an hour, by a phone call, or a visitor, only to find that he’s seized the opportunity to cause carnage in the hen house. April and May are the most dangerous months, when hungry vixens are on the prowl, but no time is really safe.

By far, the most effective predator protection, is provided by electric netting, which is available in 25 m or 50 m lengths, and multiple rolls can be joined together to make a very large area of up to several acres. Units are available for main, battery, solar and wind power. Its easy and quick to erect, and if the point below are followed, is 100% fox proof.

Of course, electric fencing is impractical in very small gardens, or with small children, so other tactics have to be used.