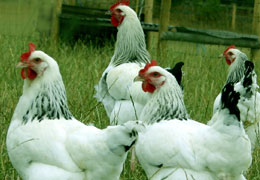 Although it has been known for more than 100 years by poultry breeders that male and female plumage and down colour differed in the offspring of certain crosses, it was in 1908 that one of the first scientific explanations of the phenonemon was put forward based on the inheritance of a barring factor, and the fact that a hen passes on certain characters to her sons and not her daughters.
In 1909 at Cambridge. Punnett suggested crossing genes for silver and gold down as well as those for barring and non-barring. It was found that if a cock from one of the gold breeds is mated with a hen from one of the silver breeds, the result is gold downed females and silver downed males. A popular cross in this country was using a Rhode Island Red cock (gold sex-linked alleles) and a Light Sussex hen (silver sex-linked alleles).

The use of sex-linked markers is more accurate, convenient and less expensive than vent sexing of day old chicks and important for commercial production to eliminate cockerels as soon as possible.
The disadvantage of this method of sexing chicks meant that the breeder had to keep two separate breeds, which led Punnett and Pease to develop the auto-sexing breeds. 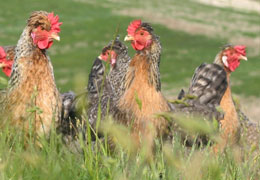 The Auto-sexing Breeds of Poultry

An auto-sexing breed is one in which the male and female chicks of the same breed can be easily distinguished at hatching by the down colour, and were developed at Cambridge from 1928 by Prof. R.Punnett and Michael Pease; they were known as the Cambridge breeds. They were strains of breeds with the ‘bar’ added from a suitable barred breed, the first of which was the Cambar which appeared during the course of genetic research. Of the breeds which followed, some were made at Cambridge and others were made by enthusiasts both at home and abroad. Many of these breeds foundered from the start and the rest never became established commercially because they were over taken by the new hybrids which were to dominate the market in the future.