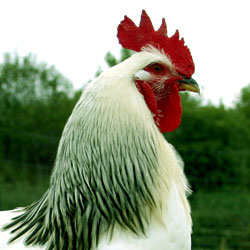 Hens have existed for tens of thousands of years in their natural habitat, and have lived close to humans for nearly 8000 years. Their roots go back to the dinosaurs. After centuries of domesticity, an uncanny relationship has developed between man and bird, but they haven’t changed a great deal since those early jungle days. The fiery red comb, the scaled legs leading to strange horny toes, and the primitive loping gait, all add to the captivating charm of this extraordinary creature from the past, which has become an integral part of our lives in the present.
Whether you love them of hate them, you cannot escape them; they are more numerous than any other bird on the planet. The world’s twenty four billion chickens provide the human race with meat and eggs at an ever increasing rate. Throughout the ages, hens have occupied a position of social and religious importance all over the world, as a symbol of protection in religious art and script, or even as a channel for evil spirits.Today, hens play a part in agriculture, the development of business and the advancement of science. They have entered our language, art and culture, and are subjects of countless metaphors, idioms, customs and jokes.

Which came first, the chicken or the egg?

Scientists believe that the first hard shelled egg was laid about 300 million years ago by the animal linking amphibians and reptiles. The first birds are thought to have appeared on earth about 150 million years ago, descending from the theropod dinosaurs.
The first chicken must have been a mutation of a proto-chicken that laid the egg containing the first true chicken, making the offspring different to the parent, therefore, the egg came first.
Genus Gallus is thought to date from about eight million years. Evidence suggests that the domestication of the fowl probably started around 6000 BC. in China, and 2000-3000 BC. in the Indus valley, but it is not clear whether these occured independently of each other or whether the fowl spread from China to India. Most of the present day breeds have been developed from the last century.

The poultry world was first alerted to the existence of blue egg laying hens by Prof.Salvador Castello Carreras when addressing the meeting of the first World Poultry Congress at The Hague in 1921. The professor had noticed these hens whilst visiting Chile in 1914, and he assumed that they were decendents of the hens seen in South America by the Missionaries of the sixteenth and seventeenth centuries at the time of the Spanish conquest.
When the birds were recorded as being ‘quite different from the Castilian hen’. This, together with the fact that many of the hens sported ‘muffs’, promped Carreras to propose the name ‘Gallus Inauris’. In his article, ‘The Araucano, The Blue-Egged Fowl of Chile’, C.A.Finsterbusch stated that, ‘it has been fairly proved that there were no fowls there before the advent of the white man in S.America’. His evidence suggested that the Spanish poultry originally imported were subsequently diluted by Balinese birds introduced by Dutch pirates, and points out that Oriental type birds are common among the mongrel poultry population of Chile. Commenting on the ‘blue’ egg he states that ‘these strange coloured shells are, however, by no means of uniform tint. There are bluish, blue-grey, purplish, greenish, greyish green, and finally greenish eggs speckled with brown, which indicates clearly some precedent colour influence, either abnormal or incidental’. Finsterbusch suggested that the greenish and bluish shell colour is due to the loss of the red pigment brought in by the imported stock from Bali. However, his explanation does not agree with the genetical data gathered by Prof. Punnett at Cambridge.

The Debut of the Blue Egg

The blue egg made its debut at Cambridge University in 1929, when Prof. R. Punnett acquired three mongrel Chilean hens (Araucanas) which laid blue and green eggs, from explorer and botanist, Clarence Elliott, whose family still live in the Cotswolds. It would be, however, another ten years before Punnett would use the offspring of these original blue egg layers to make the Cream Legbar during his experiments on producing auto-sexing chickens.

There are three varieties of Legbar – gold, silver and cream. The Gold and Silver are barred Leghorns which lay white or cream eggs, whereas the Cream is crested and lays blue, green, or olive eggs; features which come from the Araucana blood in this bird.
The Cream Legbar was the product of an experiment at Cambridge in 1939/40, by Michael Pease and Prof. Punnett to make a new line of Legbars. Their name comes from the cream coloured, softly barred plumage, the cream is recessive (see glossary), and a diluted form of ‘gold’, being midway between gold and silver, although it is not known whether the cream gene came from the Chilean hen or the White Leghorn cock, which were used in the breeding programme. The plumage is a mix of pastel shades of grey and cream with attractive salmon breasts on the females.
The chicks are identical to Gold Legbar chicks and are easy to sex at day old.
The Cream or Crested Legbar is arguably one of the most beautiful and genteel of English chickens. Always interested in any human activity it has a lively and attentive personality.The notable characteristics of this bird are its well-developed ear lobes, fine wattles and elegant crest. It has wedge shaped, long backed body with good shoulders and an upright full tail.
The male stands tall with a superior and elegant manner. He is sparsely barred with pale cream neck hackles, the barring on the saddle hackles, back and shoulders being varying shades of grey. The best examples have no chestnut colouring.

It all began in the 1930’s, at Cambridge University, when Prof. R. Punnett acquired three mongrel Chilean hens (Araucanas) which laid blue eggs, from explorer and botanist, Clarence Elliott, whose family still live in the Cotswolds.
At the start of his voyage home to England, Elliott had four birds, one of which was a cock, but unfortunately the cock suffered an early demise when roasted for dinner one stormy night by the ship’s cook, who misunderstood a command from Elliott, to console the bird. It was the loss of the cock that spurred Elliott into offering the three hens for use in the genetic studies at Cambridge, which would eventually lead to creation of the blue egg laying Cream Legbar as we know it today.